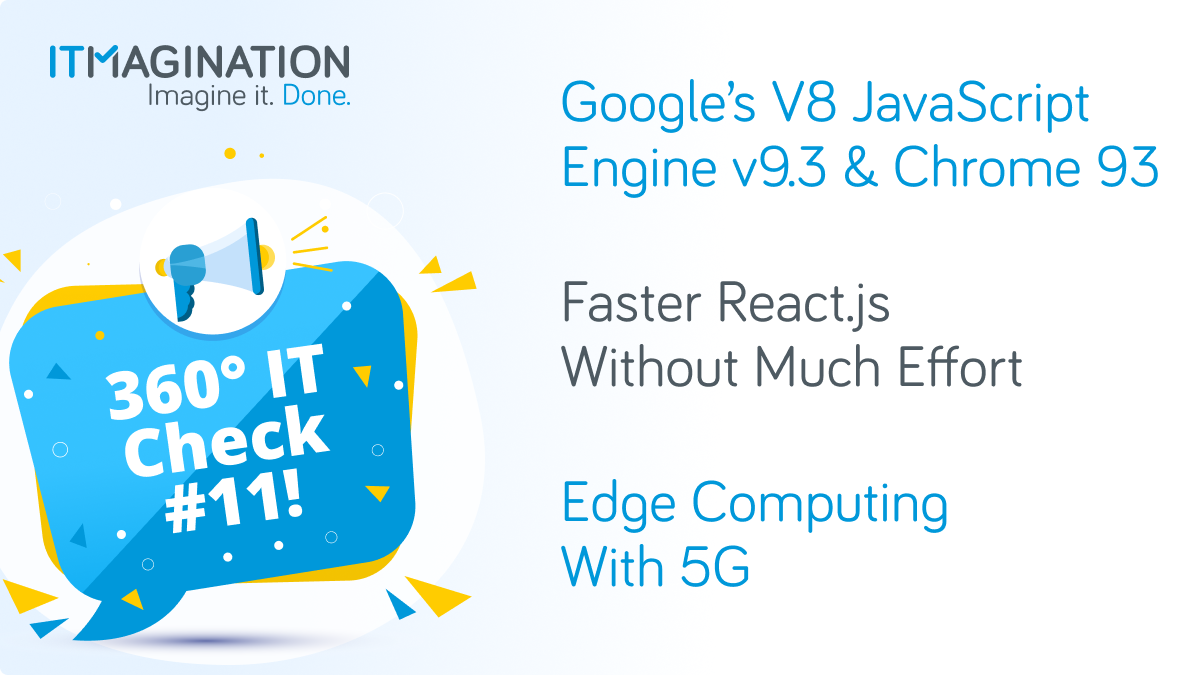 ‍Update 2021-09-14 The post was updated to feature a link to our GitHub repository, where we demo React's new features.

The newest update to Chrome, the world’s most popular web browser, is here, and with it are a few noteworthy features. First, an important change in the browser’s release cycle. New interactions are going to see the light of day every 4 weeks, which is more often than it used to.

As for the actual updates, there is a set of updates to the Progressive Web App (PWA) ecosystem. One of them is an improvement to handling links by the installable web app. In short, you can now specify that you want all links, that lead to somewhere within your app, to be opened in the app’s new window, not in a normal browser tab. Another improvement is regarding how PWAs will look like. They will now feel more native and more natural than before.

Of course, there are improvements to Chrome’s JavaScript engine - the V8. There is one change that should excite each internet user. The new Just-in-Time compiler, Sparkplug, was introduced in V8 v9.1. Only now, however, did the team behind the engine manage to optimize it, leading to spectacular results. In one of the benchmarks, JavaScript’s compilation time dropped by up to 44%. Of course, this is great news for all JavaScript engineers, as Node.js will eventually benefit from the massive improvement as well. This will also continue to greatly benefit both startups that use Node.js and enterprises using Node.js.

Previously we had talked to Artur Łabudziński, Senior Node.js/JavaScript Software Developer at ITMAGINATION, about the pros and cons of full-stack JavaScript development where he had this to say about the work on the V8 engine and how it is a major reason why JavaScript is so widely adopted:

[Talking about the reasons for JavaScript’s popularity in cloud & backend use cases] To me, because of its speed. Because of its optimization, because Google works really hard on V8, which is the engine that runs JavaScript. They optimized it, wrote a few compilers, which is why it starts fast and also can simultaneously optimize itself because of JIT, which stands for "Just In Time compilation".

Thanks to this, we now have a decent programming language that runs everywhere. And Node.js, an environment for JavaScript that runs on V8 with a connection to the Operating System that allows us to write both backends and apps that are more serious, and do more than just showing a website.

Windows 11, the next major iteration of the operating system from Microsoft, is around the corner. We will see it very soon, as it is expected to be available starting from October 5th of this year.

The set of features you can expect this fall is best described by Microsoft’s team on their internal blog. The company continues the trend of integrating its many solutions more tightly.

The anticipated possibility of running Android apps on your PC will be initially lacking, though the functionality will be available later.

Faster React Without Much Effort

After steady, and safe React 17, prepare for a few newly introduced aspects of the JavaScript framework from Facebook.

First up, we have improvements to automatic “batching” (grouping). Starting from React 18, more code in our components will get grouped together to save time on renders. It is not something we see for the first time, as DOM event handlers were optimized like that already.

We now know, however, that more state updates will get run together for additional improvements. This example illustrates it the best, perhaps:

The most exciting novelty is undoubtedly “concurrent rendering” or as some may remember it - “concurrent mode”. The much-awaited new feature will “help React apps stay responsive and gracefully adjust to the user’s device capabilities and network speed.” The main gist is that previously, all updates were uninterruptible. Once one started, it could not have been interrupted - which led to artificial delays. This now changes -  updates will be done “concurrently” (at the same time). Importantly, the change will not affect how we work with the framework much. It will “just work.”

For in-depth details about the new rendering mode, the React team has a very well-written blog post ready. The bottom line, however, is that the framework should be much faster, without much additional time.

One has to appreciate, the commitment of the core team to strive for backward compatibility, and an easy migration process to new versions. React’s core team has undoubtedly learned the lessons that came from the release of Angular, and from the fuzz that surrounded Vue 3’s Object API/Composition API controversy.

In case you want to see React's new features in the wild, go to our GitHub repository.

Partnerships run the world, and it is no different in this case. Verizon, having partnered with Microsoft, is offering a private cloud platform that is focused on reducing network latency. The combination of the ultra-fast 5G network along with placing a solution on-premises should result in lightning-fast response times. The service complements the private 5G networks that started to pop up across the USA this year.

That is certainly not the end in the area, too. As Maciej Gos, ITMAGINATION’s DevOps & Cloud Competence Leader, told us:

The areas of Edge Computing, and private 5G will only accelerate. More, and more devices support 5G connections, which means that enjoying the benefits of the fast networks gets easier. It may turn out in the near future, that one will not need a “regular” PC anymore - an iPad connected to the next-gen cellular network is all we need to use extremely-power-hungry apps since we can stream Windows 365 to our tablet.

Like what you're reading? Make sure to subscribe, or stick around, check out our website, and see if we've got a job that's a fit for you!