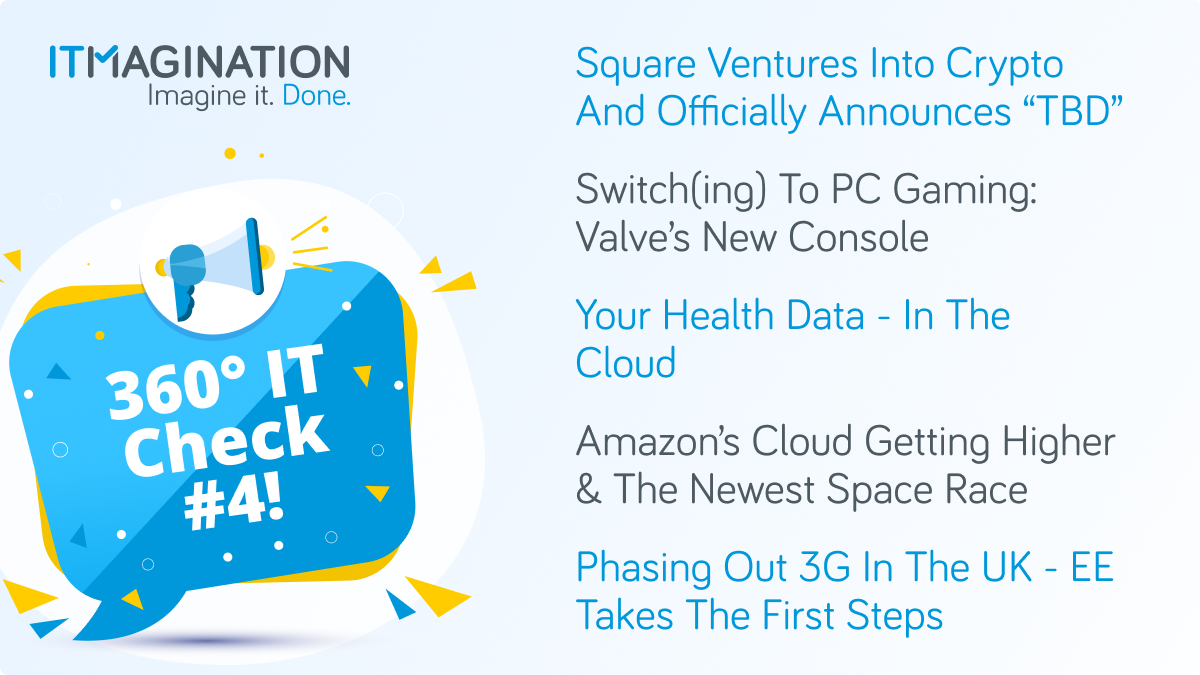 360° IT Check #4 – Square Ventures Into Crypto, Switch(ing) To Steam, Your Health Data Might End Up In Amazon’s Cloud, And More!

The crypto service is the fourth standalone unit, joining Seller, Cash App & Tidal. The newest unit is also going to be built the “open” way.

Like our new #Bitcoinhardware wallet, we’re going to do this completely in the open. Open roadmap ,open development, and open source. @brockmis leading and building this team, and we have some ideas around the initialplatform primitives we want to build.

Building out in the open is a great trend, and it’s a must when developing a product offered to the cryptocurrencies community. This sector emphasizes decentralization & free software (free as in freedom of speech and free as in free of charge) solutions, therefore a closed-source solution would likely get dismissed in an instant.

Interestingly, this makes the company enter the area long held by Ethereum and solutions built on the ERC20 chains and other side chains. One of the main reasons is simple – transaction fees can get enormous. Bitcoin can handle up to 7 transactions, and Ethereum – up to 25. This can lead to congestion, and long confirmation times of transactions (hours).

The business was announced around the same time as the newest Bitcoin upgrade, Taproot, which is scheduled to be released in a few months. The universally accepted update will bring much needed improvements, such as greater privacy - and more importantly for Jack Dorsey’s newest company - greater efficiency and smart contract improvements. With the change due this November, the new American company will likely make it in time for the upgrade.

Valve, the company behind e.g. Dota 2, CS:GO, and Steam, has announced their newest product: Half Life 3. Just kidding. It's "Steam Deck". Steam Deck is going to be a handheld console; sharing many similarities with the Nintendo Switch.

Valve’s console is supposed to boast the same PC gaming capabilities as your gaming station, allowing you to take your games everywhere with you. As a matter of fact, it will be a fully-fledged PC. This is not something that you usually see on consoles, as more often than not, you are locked into the producer’s default OS that is purposefully limited to being useful for gaming & entertainment only.

Going back to the device’s intended core functionality, the games you already play regularly, and those that you own, are most likely going to run on your Steam Deck since the OS will be based on Arch Linux with a KDE Plasma Desktop Environment.

In terms of power, the new console is a bit slower than the Xbox Series S – with a notable difference being that games running on the Deck are supposed to run at 720p in handheld mode, while the Xbox Series S offers gaming at up to 4K resolution.

With Valve’s Proton steadily developed, the gaming market is set to get a solid handheld console. Until the release of the new console, the company led by Gabe Newell promised to improve compatibility with games and anti-cheat software which, up until this point at least, was the major stopper for many.

With the prices starting at $399, the console is going to be one of the most interesting devices on the market, which seems to have responded remarkably well, as Valve’s servers  responsible for the reservation process couldn’t handle the workload and crashed. Functionality was restored within an hour.

Your health data. In the cloud.

AWS announced the general availability of Amazon Healthlake. It is a solution allowing healthcare organisations to “store, transform, and analyse health and life science data in the cloud”.

The secure big data storage for the industry is an interesting offering. On one hand, hospitals are often an attractive target for hackers - mostly due to the nature of data hospitals operate on - past surgeries, diagnoses, blood type, etc. Possibilities are wide with the ability to extort prescription drugs, change drug test results, and more. A secure environment for data is going to be surely appreciated, and valued highly.

Furthermore, the most important feature, as it was implied, is how Healthlake can help doctors in the diagnostics process – with diabetes as one of the diseases that is highlighted. Help with reaching a conclusion quicker and more accurately is surely a terrific feature.

On the other hand, data that does not have to be online is better left offline. Data has to be sent to the cloud first, with the ability to intercept anything that is being transferred. Malicious third party actors can steal RSA keys, or perform a Man in the Middle attack.

The race to develop extra-terrestrial internet is pretty heated with SpaceX, Amazon, and Softbank competing for the leadership in this developing area. Up until recently, Facebook was one of the competing companies, until the social media giant decided to sell its satellite internet division to Amazon.

The aim is to offer a low-latency high-speed broadband connectivity around the world. The goal is not too far out of reach – SpaceX already deployed 1,800 Starlink satellites out of the approved 12,000.

the chances of a collision with any human-made satellite is still relatively small. It is worth noting, however, that the number will only increase, as the fragments will not turn to dust by themselves, and therefore are a constant threat unless they get destroyed.

Satellite internet is meant for people located in remote locations, where a traditional internet connection is not feasible. This type of connection offers speeds that far exceed those of solutions that are currently offered and available in isolated areas, such as 3G, if you’re lucky.

The price? Currently, you have to pay $499 for hardware, $50 for shipping and handling, and $99 per month for service (as of 2021/07/19). All values do not include taxes, and are accurate for a location in Queens, NY, USA.  Of course, the prices somewhat reflect the innovative status, though it’s important to note, that companies attract attention via luxury options and offerings, and not via budget options (e.g. Tesla Roadster vs previous electric cars).

EE, British network operator, announced the end of its 3G network that will come in the next 2 years. The process comes as less than 3% of data and 25% of voice traffic was carried on 3G in March of this year. The company which is a subsidiary of BT (British Telecom) is in fact the first operator to stop supporting 3G services. 2G services will follow later in the decade, as they cover more of the territory than the 3G does and did.

It is the end of an era for sure, and a late one at that. In the year that 3G launched(2003), we first marveled at the possibilities of Blu-Ray, MySpace was founded, and PowerMac G5 was released. Our tech has left the advances of 2003far, far behind, and it was only a matter of time for the network to be retired.