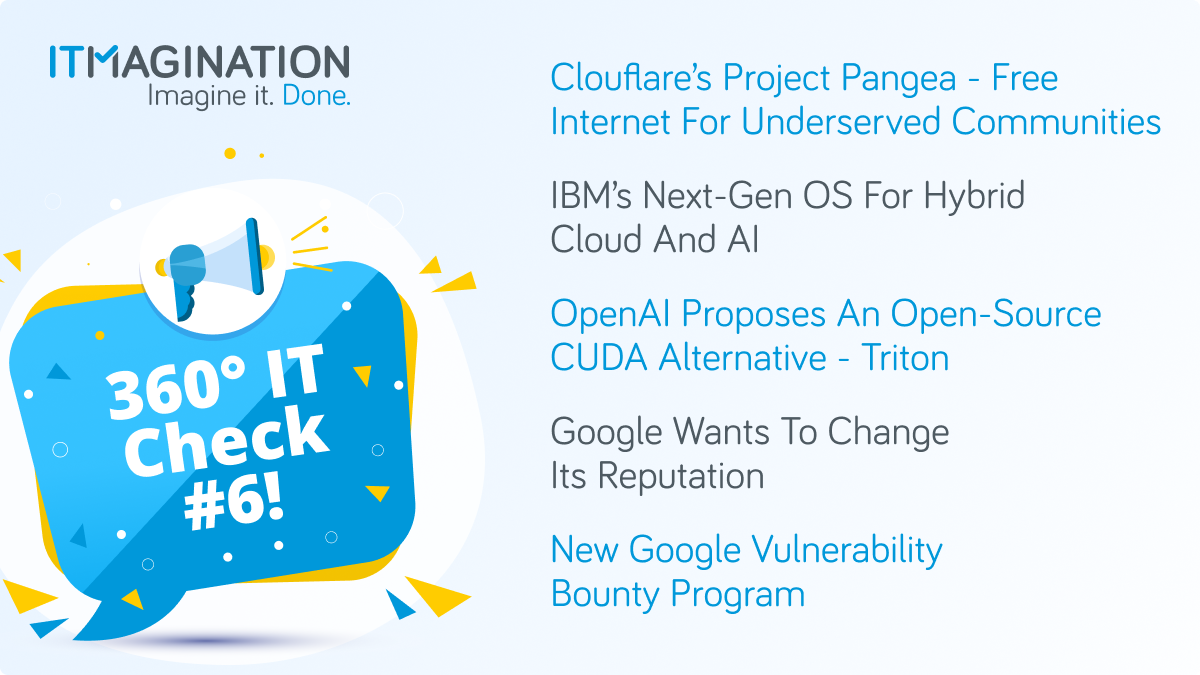 360° It Check #6 - Cloudflare Announces Project Pangea, Google Wants To Change Its Reputation; OpenAI Proposes An Alternative To CUDA, And More!

Cloudflare, American web infrastructure and website security company, promises Internet for underserved communities. The connection that the company will offer is going to be free of charge.

To be able to do that, the American enterprise is looking to partner up with other companies around the world. All interested parties may register via the registration form here. All “non-profit entities, cooperative community networks, or private or small commercial networks operating in the interest of the community,” may apply, and they “must be primarily focused on providing Internet access to local, underserved communities.”

The reasoning is simple, and it’s “Cloudflare’s mission is to help build a better Internet, for everyone, not just those with privileged access based on their geographical location.” The company’s efforts are admirable. Even more so that we live in the world, where for some Internet is a right since 2010, while half of the World’s population still does not have connection with the Web.

This solution was created for enterprise clients that got stuck in the era of COBOL & mainframes. However, better solutions might already be available on the market. Azure’s Stack/Azure Arc or Google Anthos were pointed out as potentially superior in a scenario of migrating mainframes.

OpenAI, the developers of the famous GPT-3 language model, announced the release of an open source language, Triton. Triton is an answer to Nvidia’s CUDA, with one important distinction. The main differentiator is supposed to be the ease of use. GPU Programming was… “surprisingly difficult” to date, the company admits. Writing CUDA C or CUDA C++ must not have been too gentle for data scientists. The data analysis & data science community knows Python very well, though, and often has no business of knowing C. OpenCL, the only real competitor up until now, also required users to know these two programming languages.

OpenAI’s goal is simple - they want to become a real alternative to CUDA for Machine Learning. The combination of faster execution and better developer experience might cause a potential shake up in the community.‍

The company has shared some snippets on their blog. The one we are pasting below is for the Fused Softmax operation. As you can see, it’s just Python syntax; the code is going to get translated to GPU code behind the scenes.

‍For all the technical intricacies and a link to the project’s GitHub, follow this link to OpenAI’s blog post.

If you wish to try the language out right now, open your terminal, and type in pip install triton.

Google Wants To Change Its Reputation

Google, the company known by many for its reputation as an app killer (AngularJS, Google Hangouts, Google+, Hire by Google, etc.)., clearly is uncomfortable with peoples’ views. Perhaps this is exactly the reason why the company “issued a promise” on Monday that “it's safe to build a business around its core technologies.

As a result, the company from California, USA, will designate a set of APIs and declare them as “Google Enterprise APIs.” Any changes in these services that could impact customers in a significant way will be subject to “strict guidelines.

The company did leave a small escape hatch in place. The internet giant declares that “no feature may be removed (or changed in a way that is not backwards compatible) for as long as customers are actively using it.” In the worst case scenario, transition will be “effortless”. Kripa Krishnan, Vice President at Google Cloud, said: "If a deprecation or breaking change of an API is unavoidable, then we are saying that the burden is on us to make the experience as effortless and painless as possible to our customers."

This statement is another chapter in the enterprise's story of being more business-friendly. From an engineering-driven organization; a self-proclaimed “foremost authority” to a more friendly company, the change started to materialize after Google brought in Thomas Kurian. The Cloud division wants to be seen as more friendly now, and building longer lasting relationships.

To give the company a bit of justice, even though the length of the list of services’ “obituaries” is staggering, some of them were simple rebrands or their incorporations into other apps. One example of a rebrand is a switch from Tez to Google Pay in India, and an example of an integration is the case of YouTube Gaming.

The company from Mountain View announced a new bug bounty platform. After 10 years passed since the release of their previous program, Google wants to bring all similar programs across the company to bring them closer together. Apart from an updated UI and elements of gamification, the company also announced a new “Bug Hunter University”. It’s a dedicated space for learning for bug “hunters” of all skill levels.

Be it via an external or internal bug bounty platform, paying researchers and “hunters” for verified bugs is an important aspect of any company’s security policies. However, this needs to be integrated with a wider array of practices, such as secure-by-design development, code testing, and static & dynamic analysis.