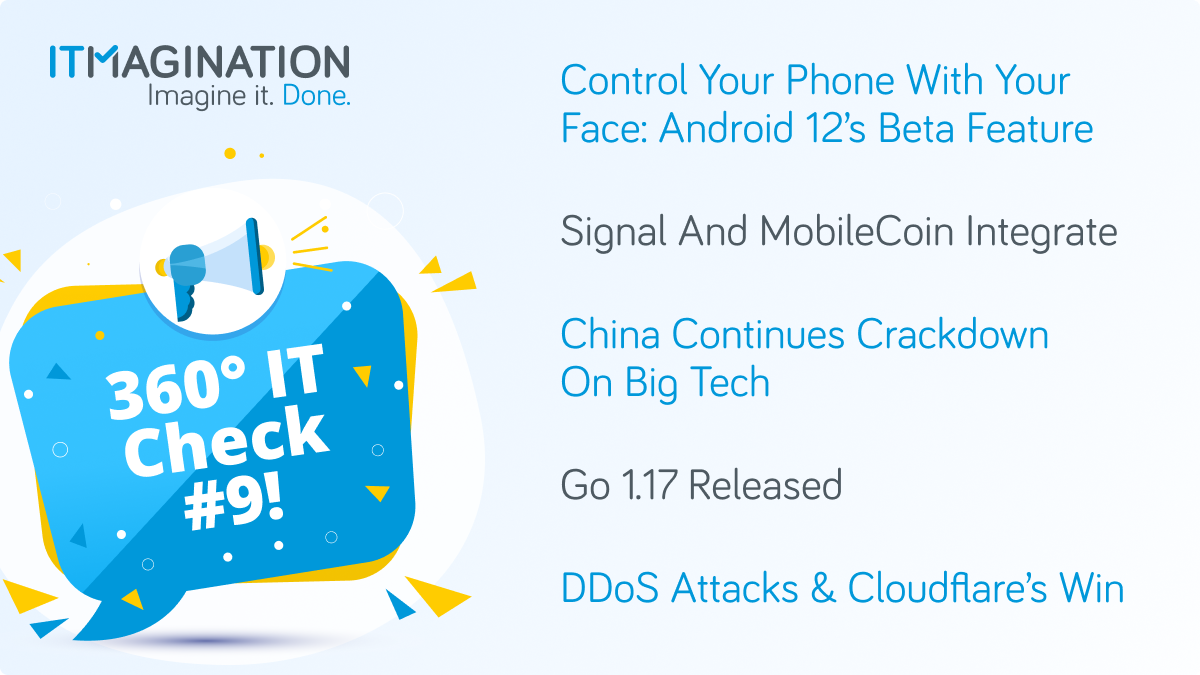 360° IT Check #9 - Android 12 Beta Has A New Accessibility Feature, Signal Partners With MobileCoin For Private Payments, Cloudflare Comes Out On Top, And More!

Listen to this episode and follow us on Spotify:

Android beta 12.0.0 introduces an interesting feature that might be a game changer for all those who cannot use phones as the majority does. Google added a feature called “Camera Switches”, which, when enabled, allows you to perform predefined actions using face gestures. Overall, there is a set list of gestures and actions that Android 12 beta recognizes and allows for:

Camera switches are an addition to the Accessibility Suite on Android. It compliments the “Switch Access” feature, which lets you control your phone without using your touch screen. The difference here is that you still needed an external device to use the new feature. Now, the only thing you need is your face.

Only recently did we get cameras of resolution that were high enough to allow for that. Many people might remember Microsoft’s Kinect, which lets you control the Xbox 360 with your body. The camera was not good enough, however, and you could not use your fingers - something that was clearly missing. Now, millions of people can control their phones in a way that is easy for (almost) all. It just so happens, that phones are our most personal devices, which often allow us to manage our whole lives.

MobileCoin - a payment solution dedicated to easy, privacy-focused transactions using one’s phone is integrating with Signal - the privacy focused chat-app. So far, the integration between the two is in beta, which is available in the UK only. The geographical scope of the beta will expand as the non-profit operating the app gathers more feedback.

Signal was launched as a chat with the strongest encryption possible, while being “dead-simple” - this approach earned them millions of users, and the number is steadily growing, as well. The ability to transfer money using the app will allow for a fiercer competition with leaders in the field - such as WhatsApp or iMessage. It has one huge advantage over its rivals, however. One does not have to link a personal bank account, which removes the caveat of privacy. It’s only about linking your MobileCoin wallet, which is a piece of information not connected to any other data.

We have mentioned crackdowns of the Chinese government on tech companies several times before, and to add to that, we now have big news on our hands. “China's Ministry of Industry and Information Technology (MIIT) said on Wednesday that 43 apps, including Tencent Holdings Ltd's [...] WeChat, were found to have illegally transferred user data, and ordered their parent companies to make rectifications.” Reuters wrote in their article.

Now, the violating parties have until August 25th to make the necessary changes, or else they will face repercussions from Chinese authorities “in accordance with relevant laws and regulations.” Those are becoming more strict, too. On August 20th, a new regulation had been passed. The law, which is called Personal Information Protection Law (PIPL), is set to take effect in November. Some of the provisions?

The new law requires app makers to offer users options over how their information is or isn’t used, such as the ability not to be targeted for marketing purposes or to have marketing based on personal characteristics, according to Xinhua.

It also places requirements on data processors to obtain consent from individuals in order to be able to process sensitive types of data, such as biometrics, medical and health data, financial information and location data.

Apps that illegally process user data risk having their service suspended or terminated.

Go, the language for backends from Google, is now in version 1.17. With it, there are some interesting changes, and novelties.

The compiler had been improved, which resulted in a 5% performance improvement, and a reduction of the size of binaries for the amd64 platform of about 2%. While it might not seem as much, it does add up in the end.

Devs targeting ARM64 on Windows have a reason to be happy because now they can target the platform.

There is one other big change to the language. Quoting the project’s blog post:

The first two are new functions in the unsafe package to make it simpler for programs to conform to the unsafe. Pointer rules: unsafe. Add allows for safer pointer arithmetic, while unsafe. Slice allows for safer conversions of pointers to slices. The third change is an extension to the language type conversion rules to allow conversions from slices to array pointers, provided the slice is at least as large as the array at runtime.

To put it simply, the first two changes allow for safer operations when looking for performance improvements. “Unsafe“ are mostly relevant if you are out of options when trying to speed up your code as they provide the true JavaScript experience “step around the type safety of Go programs.” The last described change in the language provides a bit more convenience for Go developers.

Last week, a gigantic Distributed Denial of Service (DDoS) attack took place, luckily stopped by Cloudflare. The attack was a challenge to handle, since there were as many as 17.2 million requests per second [sic!]. This makes it the biggest attack to date; previous attacks were 3 times smaller.

The botnet responsible for the attack is Mirai. According to Grzegorz Kroczek, Software Development Engineer at ITMAGINATION,

"The Mirai botnet is exceptionally well-designed - it is one of the most dangerous, advanced and sophisticated botnets. It is another spectacular piece of code, which had an unfathomable impact on cybersecurity. It was first used in some of the largest and most destructive distributed denial of service (DDoS) attacks, starting from September 2016."

The way the botnet operates is ingenious in its simplicity. The malware scans the internet for IoT devices, which are then taken over using one of the ~60 default login credentials. One would think that a good practice of changing default passwords is applied. Could not be more wrong. There are currently hundreds of thousands of IoT devices using default login, and password.